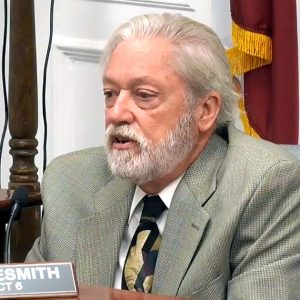 Primary Ballots: NeSmith often takes Democratic primary ballots, but not exclusively.
Donations: Donated to John Barrow (D) in 2006, Jonathan Wallace (D) in 2017, Deborah Gonzalez (D) in 2017 and 2018, and Stacey Evans (D) in 2018.
Fundraising: On the fundraising committee of Houston Gaines (R) in 2017.

Inferred Party: Identifies as a Democrat.

Economic Development: Commissioner Jerry NeSmith has been vocal about reversing the flight of businesses to Oconee county and about economic development on the west side. He wants to make it easier to do business here, making Athens-Clarke County more “business friendly.” He has consistently advocated for more money for street paving.

Support for Mental Health Services: NeSmith serves on the board of Advantage Behavioral Health and has supported increased spending to support mental health in Athens.