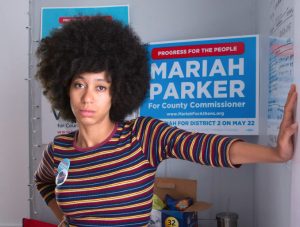 Graduate TA in the department of language and literacy education at the University of Georgia.

BA in Creative Writing and a minor in Modern Languages from Warren Wilson College in 2012.

Master’s in Linguistics from the University of Georgia in 2017.

Commissioner Mariah Parker announced an exploratory committee on January 7, 2021 to run for US Congress in GA-10 against Jody Hice (R).

Parker gained national attention on June 5, 2018 when she was sworn-in as commissioner on The
Autobiography of Malcolm X.

Transparency: Commissioner Mariah Parker was instrumental in moving commission work sessions to City Hall where they could be televised and recorded.

Economic Justice for District 2: During her 2018 campaign, Parker ran on a platform of economic justice. She promised to bring in jobs that pay $15 / hour and to provide start-up capital to local minority-owned businesses. She also stated that she would give “economic power back to the East Athens Development Corporation” and invest in jobs skills training programs.

Criminal Justice Reform: Parker pledged to end cash bail, which happened on June 4, 2019. She also promised to “deprioritize marijuana arrests and reduce sentencing for past offenders.”

Parker was on the “Two Broads Talking Politics” podcast on September 25, 2019.

2018 Special Election (to replace Harry Sims, who ran for Mayor)