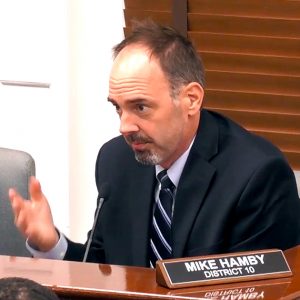 Inferred Party: Seems to have switched from a Republican when he was young to a Democrat-leaning independent now.

Gateway Beautification: Hamby encouraged the use of TSPLOST 2018 funds for infrastructure improvements and beautification for the “gateways” to Athens (for example, Prince Avenue, Lexington Road and other points of entry).

The Gerrymandering of Athens: Hamby encouraged the Republican-controlled state legislature to gerrymander Athens’ commission districts in 2022 when he voted against the approval of a Board of Elections-endorsed redistricting map. He was informed several times about the consequences of this decision, including once just before the vote by Manager Blaine Williams. The Republican plan to gerrymander Athens removes three commissioners from office by fiat and puts over half of Athens voters in a different district just months before the May 2022 local election.

APN has found through open records request that Hamby made four calls to Athens’ Republican state delegation on January 6, the day the Republican commission redistricting map was released. Based on Senator Bill Cowsert’s comments on Tim Bryant’s radio show on January 7, these calls were likely made to thank the Republican delegation for the gerrymandered maps.

The ACC Democratic party has censured Hamby over this incident, saying that he has enabled Republicans to undermine democracy locally.