Voters in Athens went to the polls on Tuesday, November 5 to vote on the $314 million dollar project list for SPLOST 2020. SPLOST is a 1% sales tax which is the primary means of capital funding for Athens-Clarke County. Voters approved the referendum 78-22%, a resounding victory in line with previous SPLOSTs.

This means that Athens’ 8% sales taxes will remain the same. SPLOST collections will continue when SPLOST 2011 expires next year, and will continue until the 2020 project list is completely funded, which is likely to be in 2031. You can see the full project list below: 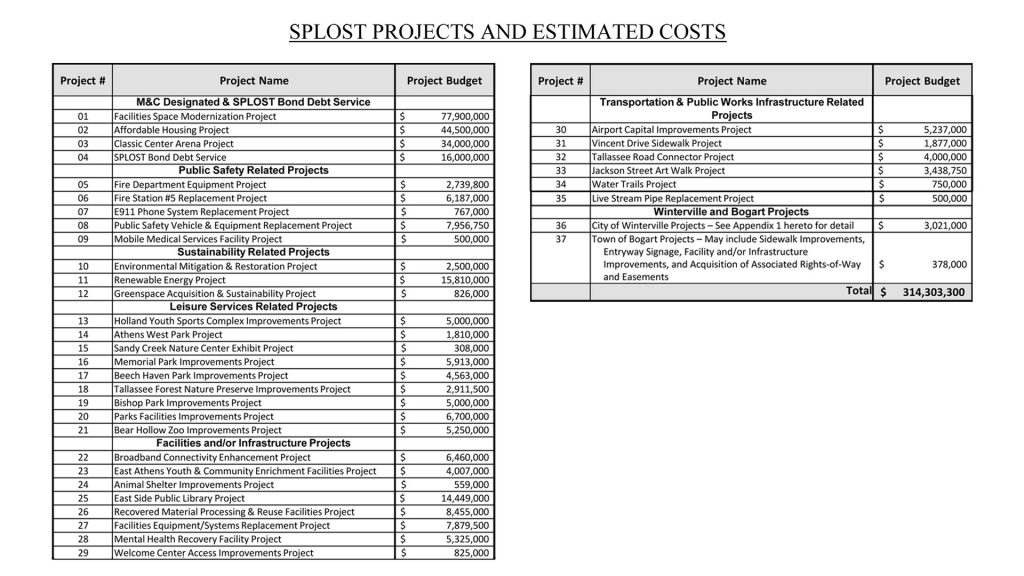 White turnout was low (12.5%), SPLOST received a high amount of support from Athenians in every precinct, by a ratio of at least 2:1. Support was high despite project #3: the Classic Center Arena being on the final list. This project is not popular with some Athenians, and even some members of the SPLOST Citizen’s Advisory Committee (CAC) have spoken out against it. It became even less popular when it was re-added to the project list at the last minute at the commission’s final SPLOST work session.

Either way, SPLOST 2020 did pass and it did include the Classic Center Arena. This means the arena will be built, and we’ll all have to be content with the living wage jobs, economic activity, sports and music events (and traffic) that the arena will bring to Athens.

If you have any further questions about SPLOST, you can find the answers at splost.com or at votesplost2020.org.