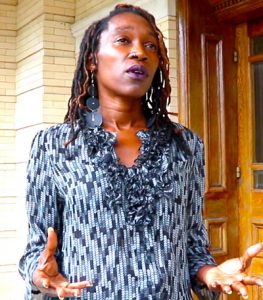 Mokah Jasmine-Johnson, activist and founder of the Athens Anti-Discrimination Movement (AADM) and the Athens Hip-Hop Awards, is running for State House, District 120 in 2022.

Fighting Discrimination — Johnson began her activism in 2016 to end discrimination, downtown and throughout Athens. Her focus at that time was the creation of an Athens Civil Rights Committee and the passage of comprehensive civil rights legislation, both of which were eventually implemented.

Criminal Justice Reform — As part of AADM, Johnson was very active in the fight to end cash bail in Athens, Georgia. Under her leadership, AADM has regularly held forums and workshops on ending the school-to-prison pipeline and other criminal justice reform topics.

The “Freedom Plan” — Johnson’s calls her 2022 platform the Freedom Plan, which centers around education, economic advancement and human rights. Johnson defines ‘freedom’ as the ability “to plan for life and to make those plans a reality.” She feels that funding education, improving wages for the lowest earners, expanding Medicaid, improving the affordability of home ownership and defending the right to protest are essential aspects of freedom that she would fight for in office.

In addition to her work in the music industry and as an activist in AADM, Johnson has served on the mayor’s Task Force for Diversity, Equity, and Inclusion, another mayor’s Task Force on police oversight and on the ACC Board of Elections. Johnson ran unsuccessfully for State House, District 117 in 2020.

Johnson ran unopposed in the Democratic primary for State House, District 120 in 2022.