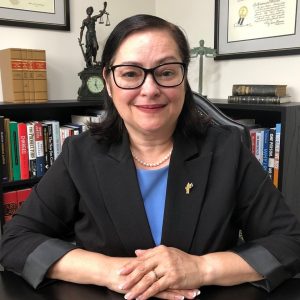 Deborah Gonzalez (D) is the District Attorney of the Western Circuit, which includes both Athens-Clarke and Oconee counties.

Ending Mass Incarceration – Gonzalez has stated on her website that she will not prosecute low-level cannabis offenses, she will reduce prosecutorial overcharging and also end the use of cash bail.

Smart Justice – Gonzalez has stated that she will refuse to prosecute women under HB 481, the “heartbeat” anti-abortion bill. Instead, she will address racial disparity and establish restorative justice programs in Juvenile & Superior Courts. She says she will be “smart” on prosecuting serious crime, and elaborated on this issue in a comment to APN.

Open Assistant DA Positions – Recently, Gonzalez has admitted to facing a “serious shortage of Assistant District Attorneys.” She says this is due to a nationwide prosecutor shortage and uncompetitive salaries in the Western Judicial Circuit.

Juvenile Justice – Gonzalez ran on ending the practice of charging juveniles as adults, except when legally required. This promise was repeated in her “day one” memo. Yet, in her first ten months in office, she prosecuted not one but two minors as adults. She spoke about her decision on WUGA.

Since then, Gonzalez has announced the creation of a Juvenile Restorative Justice Diversion Program in collaboration with the Georgia Conflict Center. This could help many juveniles stay out of the traditional justice system in the future.

September 26, 2021 – Gonzalez has received a grant from the Vera Institute of Justice to redesign ACC’s Diversion program to make it more accessible for low-income residents and to reduce disparities for people of color.

“[Gonzalez] hopes to double participation in [the ACC Diversion] program by 2022, and will put in checks to monitor that the diversity is increasing.”

Gonzalez was an attorney specializing in media, technology and entertainment through her legal firm D Gonzalez Law Group, LLC and Letterbox Legal. In 2018, she served one term as state representative for district 117, serving on the Judiciary non-Civil committee.

Gonzalez’s fight to become DA went far beyond the ballot box; in fact, it went all the way to the Georgia Supreme Court. When Governor Brian Kemp tried to cancel this election using an unconstitutional law passed in 2018, Gonzalez sued him and won. This paved the way for her electoral victory later that year.