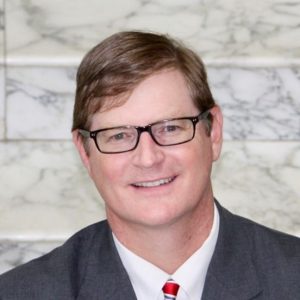 Brian Patterson is a candidate for District Attorney of the Western Circuit (including Athens-Clarke and Oconee counties).

Patterson is wrongly listed as an incumbent on the ballot. He is currently serving as interim DA, but has never been elected or appointed to the position.

Victim’s Rights – Brian Patterson pledges on his website to “champion the rights of crime victims and always give them a voice in the criminal process under the Crime Victims’ Bill of Rights and Marsy’s Law.”

Patterson has 17 years experience as a prosecutor and has served as the Chief Assistant DA since 2007. He previously worked as a white collar criminal defense lawyer for Chilivis, Cochran, Larkins & Bever.

LaKeisha Gantt, President of the ACC School Board, recently criticized Patterson on social media for a 20-year sentence for cannabis trafficking given to her brother, Ken Campbell.

When Campbell sought to appeal his sentencing and lost, Patterson said, “We are pleased that the sentence and conviction have been affirmed, and we intend to fight to keep Mr. Campbell in state prison for the entire 20 years.”