The Georgia Presidential Primary has been rescheduled and will be held on Tuesday, June 9.

Polls are open from 7am – 7pm on election day. Find your polling location.

Standard time and place for early voting is at the Board of Elections office downtown (155 E. Washington Street) from 8am to 5pm Monday through Friday from March 2 to March 20.

You may wish to check out a sample ballot before you vote:

Who are these people?

Here’s what you need to know about each candidate on the ballot: 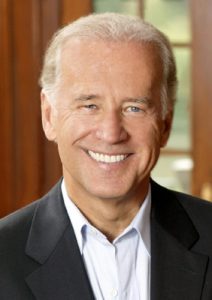 Experience: Executive – Vice-President under Obama (2009-2017).
Legislative – Senator from Delaware from 1973-2009.
Economics: Right of party: promote free-trade, invest in education, support the Affordable Care Act.
Foreign Affairs: Center-right of party, “We must fight for our values … wherever they are under attack.”
Polling: 2nd place nationally (RCP average as of 2/21/20)

Joe Biden was the early favorite, seeming destined to be the eventual nominee. However, after dramatically under-performing in both Iowa and New Hampshire, his fundraising has suffered. He remains competitive in national polls but has dropped 10 points in a two weeks after his failure in Iowa. That shows the weakness of the field generally, but even given the weak competition he may not be able to recover. His boost from the win in South Carolina will help, but he’s polling poorly in key Super Tuesday states.

SUPER-TUESDAY UPDATE: After performing very well on Super Tuesday, Biden is now back in the lead. 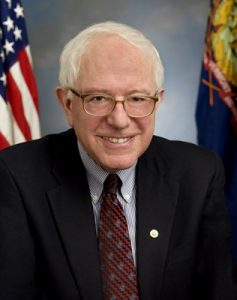 Experience: Legislative – Senator from Vermont (2007-present), Representative from Vermont (1991-2001).
Executive – Mayor of Burlington, Vermont (1981-1989).
Economics: Left of party. A supporter of democratic-socialism.
Foreign Affairs: Left of party. Would end US support for war in Yemen, bring our troops home and cut the military budget.
Polling: 1st nationally (RCP average as of 2/21/20)

After being essentially tied for the victory in Iowa and winning New Hampshire and Nevada outright, Bernie Sanders is the clear front-runner for the Democratic nomination. He is the fundraising leader and has an army of dedicated supporters across the country. Is his win inevitable at this point?

Probably not. He’ll face extreme opposition from the Democratic establishment and he might be the last candidate some conservative Democrats would rally behind. That makes his road to the nomination difficult, despite his overwhelming advantage with anyone under the age of 50. He also polls well with people of color. Even so, he’ll need to do extremely well in on Super Tuesday if he’s to lock down the nomination early. Otherwise, he’ll have a long fight ahead.

SUPER-TUESDAY UPDATE: Sanders did not do nearly well enough on Super Tuesday to lock down the nomination. In fact, it seems he has slipped to second place in delegates, which is a very bad sign for his chances.

Candidates Who Dropped Out

I would like to officially endorse Bernie Sanders for President of these United States.

Yes. As long as he is able to secure the strong support of the Democratic party, I believe Bernie will win in November. He does very well in head-to-head match-ups against Trump in polls. Unfortunately, party leaders like Obama and Hillary Clinton have already expressed their strong dislike of Sanders and might not be willing to switch gears after the convention is over. Will they embrace the progressive takeover of the party, with all the youthful energy that both Sanders and AOC bring with them? Or will they resist, holding out for another election and a more corporate-friendly candidate? I feel that they should, and eventually will, embrace the progressive values that are obviously the future of the party.

The fates of the Democratic party, our country and perhaps even the world (once you consider the issue of climate change) are at stake in this election. We face enormous, global challenges which the neoliberal establishment has proven incapable of addressing. In the Republican party, the failure of the establishment has led to Trump. They’re not going back to the way things were, either. The next Trump might even be more ruthless and criminal (or worse, competent!) than the last. Democrats have a choice — we can abandon our principles and sign ourselves up for any candidate who will oppose these monsters from now until they stop holding elections, or we can fight back.

I don’t believe that one person, or even one President, can make the changes that are needed in our society. Bernie can’t solve these problems alone. We can only solve them by standing up for what’s right together. Bernie is the only candidate who understands the power of the people and how it can be organized effectively to bring about change. He has made this the core of his campaign.

FDR, America’s most progressive President (for his time), created the New Deal not because he was a socialist (he wasn’t), but to save capitalism from revolution. He succeeded. Bernie can succeed in exactly the same way. It’s my hope that his political “revolution,” with our help, can stabilize our society. As the climate continues to unravel, I don’t think that a less ambitious President has much of a chance of succeeding.