Too many Athens residents suffer from poverty

Readers of this blog presumably know that Athens has a huge poverty problem. Our poverty rate’s 5-year average stands at about 34%, according to the US Census Bureau. While the large student population may somewhat inflate these numbers, Athens’ poverty still stands at about twice the state average after accounting for students. That’s way too high.

Advocates and community members have criticized the Mayor and Commission over the years for not doing enough to fight poverty. This concern was a part of the reason why progressives won big in last year’s local election. This year, the commission is getting serious about taking action, with Commissioners Mike Hamby and Ovita Thornton proposing a $4 million ‘Prosperity Package.’

What’s a Prosperity Package? Will it help?

So far, the proposed Prosperity Package is split 12 components.

Commissioners indicate that these are “just suggestions” and that the final version of the package would be determined later through public input over the next year. This makes the proposal difficult to analyze. At this stage, the Prosperity Package is just an idea – it represents the commission’s dedication to fighting poverty.

One thing the commissioners were specific about is how they planned to fund the package. They are planning for the money to come from reserve fund balance (aka the “rainy day” fund).

Unfortunately, credit markets require that local governments keep a lot of money in reserve at all times, just in case. As we found out in 2008, a stock market crash or recession could happen at any time. The same is true of a terrorist attack or natural disaster. If Athens didn’t have a large reserve during the last financial crisis, cuts to government services would have been severe. We couldn’t borrow money to meet our needs, as it’s nearly impossible to borrow during serious recessions. Furthermore, with nothing in reserve, interest rates would be very high even in the best of times. Our credit rating as a county is directly tied to the amount we keep in reserve.

To be clear, I think that keeping our cities at the mercy of Wall Street credit markets is a crazy way to run a national economy; I’m not advocating for this system.

The sad truth is that the “rainy day” fund is essential for us to continue our existing government services. It’s not intended for the creation of new or expanded services. That being said, last year’s proposed budget did make use of $4.3 million from the reserve. However, this was mostly for capital expenses ($3.45 million) and very little was for operating costs ($0.87 million).

The amount Athens has kept in reserve has dwindled in recent years: 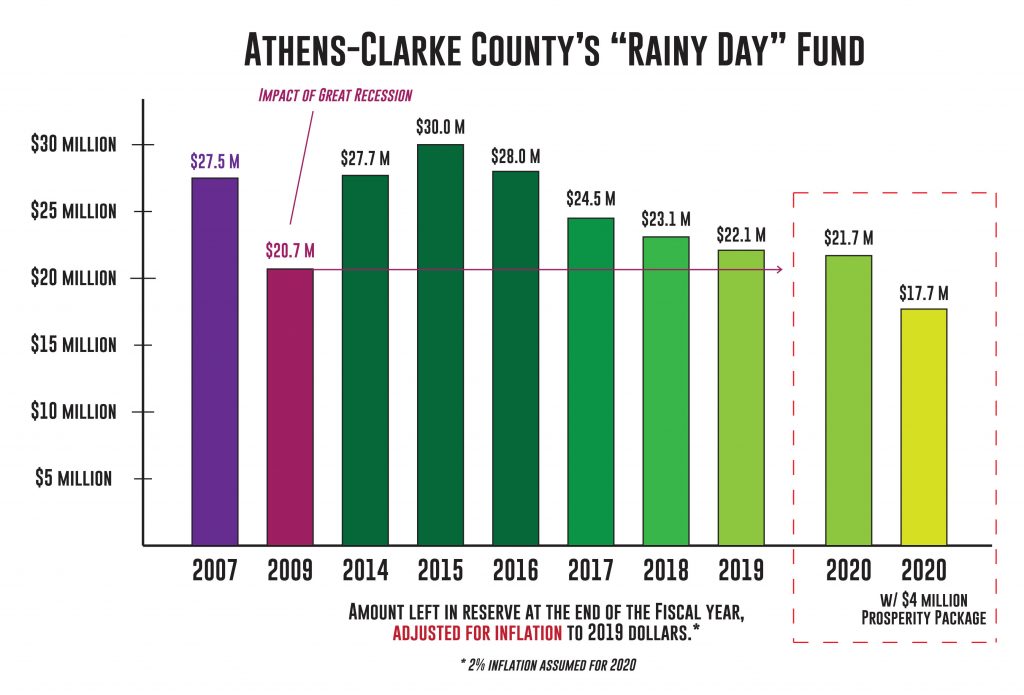 With another recession surely on the way at some point, it seems prudent to start building back up our reserve. The original 2020 budget kept us even, but after adding the Prosperity Package, the fund balance would fall in real terms to the lowest level in at least 15 years.

I don’t believe that fund balance should be used for unspecified, “we’ll decide later” operating expenses. To make matters worse, the commission is only a few weeks away from voting to approve the budget. It seems that we should maybe take a step back and think on what exactly we’re looking for from this program.

Where we go from here

I have some recommendations for how we could improve the Prosperity Package, going forward:

Narrow the focus to one or two identified needs

There are a lot of needs the Prosperity Package could try to tackle: job training, affordable housing and food insecurity just to name a few. The existing proposal splits the $4 million between 12 different programs. Rather than spread the money a mile wide and an inch deep, I would rather see a serious effort to make progress on one or two community needs. For example, affordable housing could easily be the primary focus of the entire $4 million (and then some).

$100 Billion would be enough to end poverty in Athens forever! $4 million … isn’t exactly a lot of money anymore …

Spend some time planning before the money is approved

Is the commission in a rush to get the Prosperity Package into the budget this year? That’s understandable, but any committed anti-poverty program would have to be a marathon, not a sprint. No matter what decisions the commission makes in the next couple months, our poverty rate will probably stay about the same. It may be better in the long-run to do more planning before approving the funding. How best can we spend this money? How much can we spend year over year fighting poverty without breaking the bank? What are the exact goals of the program and how will we know if it has been a success? These questions have yet to be answered.

Let’s have a town hall meeting or three, and gather input while taking a year or so to plan. I feel this would be better in the long-run than spending money out of fund balance before we finalize a plan.

Raise property taxes rather than spending out of fund balance

Our reserve fund balance is threatening to dip below levels deemed acceptable by Manager Williams and other staff members. Unfortunately, we can’t fund a long-term anti-poverty program out of reserve balance. I feel that we’d be better off listening to the advice of the experts in this case and leaving the fund balance where it is. If you feel that poverty in Athens is at emergency levels, as I do, then we can still fund this necessary effort by raising taxes.

This might not be the most popular approach. It’s tempting to view the balance held in reserve as available for us to spend. Yet, maybe we can serve all residents better by our local government keeping a robust fund balance and even increasing it if possible. We might find out exactly how committed we are to fighting poverty in our community once the property tax bill comes due. Athens is in my experience a very caring community, and I hope that we will accept these additional taxes as we settle in for the long fight for economic and social equity.

I believe a real effort to combat poverty can’t be done in a year. It unfortunately also can’t be funded out of reserve balance. Without clear objectives and a way to sustainably fund them, I don’t believe we should go forward with a program like the Prosperity Package, or indeed any program.

I hope I don’t discourage the commission from working towards the promise that the Prosperity Package represents. I think this idea is an important one, and I’d love to see the commission pursue it boldly. But first, let’s take a step back and analyze what the community needs, and how we could sustainably raise the money. Let’s not let this package be a one-year effort that fails to move the needle on poverty. Instead, lets make real plans to start chipping away at this problem one year at a time, in a way that we can continue, year after year.

I want to thank Commissioners Hamby and Thornton for bringing this idea forward, and also everyone who has supported it thus far. This is exactly the kind of bold thinking Athens voted for when the current commission was elected. With some additional planning, we may indeed be headed towards a great era of equity in Athens-Clarke County.

One thought on “Thoughts on the Prosperity Package”