With the end of 2020 finally approaching, you can almost hear our city give a collective sigh of relief. But there were some good things that happened statewide and in local government this year!

Before we get to those, I’ll pick the top 5 worst things that happened in local government & politics in 2020:

#5 – Lack of transparency on the EMS oversight committee

National EMS, Athens’ for-profit ambulance service, is overseen by representatives from both local hospitals and the ACC and Oconee governments. Together, they form the EMS Oversight Committee which has been meeting regularly ever since National EMS was hired in 2009.

At least, they did until this year.

When the committee was informed by ACC Attorney Judd Drake that they are required by the Georgia Open Meetings Act to allow visitors to attend their meetings, they stopped having meetings altogether. This decision has allowed National EMS to operate freely, without any oversight from the local government, throughout 2020.

Things became even more opaque with the tragic death of Commissioner Jerry NeSmith, the only active ACC representative on the EMS Oversight Committee. Mayor Kelly Girtz has yet to appoint another commissioner to this position, but he will likely do so early next year.

Democrats’ hopes of winning back the Georgia House of Representatives were dashed this year after their defeat in districts 117 and 119. While they won both districts in a special election in 2017, Democrats have performed poorer there in each following election.

Jonathan Wallace (D) lost district 119 to Marcus Wiedower (R) by a wider margin in 2020 than he did in 2018 despite earning almost 2,000 more votes. The same is true for the Democratic candidates running in district 117, which is currently held by Houston Gaines (R). Unfortunately for Democrats, Republicans in Oconee County turned out in record numbers in 2020, swamping the modest increase in Democratic turnout seen in Clarke County.

Failure to win the state house means Democrats won’t have a seat at the table as district lines are redrawn following the 2020 Census. Republicans are now free to make changes that could put 117 and 119 out of reach for Democrats for a decade.

Athens lost E3 Thai, Mama Jewel’s Kitchen, Gyro Wrap, Caledonia and other local businesses this year as the coronavirus pandemic rages on. After losing Ike & Janes and the Prince Avenue location of Avid Bookshop last year, these new losses are felt even more powerfully. Athens has always bounced back in the past, but this year with Daily Groceries and even the Flagpole brought at times to the point of crisis, things feel more precarious than ever.

With corporate chain stores proliferating downtown, the very character of Athens itself seems at risk. In 2021, please continue shopping local!

The Athens-Clarke County Police Department used tear gas and rubber bullets against peaceful protesters downtown on the night of May 31, during the George Floyd protests. In the days that followed, they lied repeatedly in press releases and other public statements, claiming they had “strong intelligence” the protests were infiltrated by violent extremists.

ACCPD’s shameful response to the protests is part of a broader effort by the Trump administration and police agencies around the country to de-legitimize the goals of protesters and paint them as domestic terrorists. If our country continues to devolve into authoritarianism, you can expect to hear more of this kind of propaganda in coming years.

Solidarity is our best defense against efforts like this to divide us, whether coming from a foreign country or the very people we pay to protect us. Whenever police try to justify violence done against peaceful protesters, I advise remaining skeptical until proof is provided.

COVID-19 has killed over 300,000 Americans, sickened nearly 20 million and has dominated our lives for nine months and counting. I’m sure there’s no surprise that it’s at the top of this “worst of” list. Let’s just hope it’s not also at the top next year.

Georgia is #8 in the country in terms of COVID deaths with over 10,000 Georgians having lost their lives. It’s a true public health crisis that Governor Brian Kemp bears some responsibility for by recklessly reopening our economy in late spring while refusing to implement a mask mandate.

The University of Georgia also showed a disregard for the lives of students, faculty and staff alike by reopening for in-person classes and even football games.

The return of students to campus coincided with a massive spike in COVID cases in Athens. Deaths increased as well. From May 21 to August 20, Athens averaged 2.7 COVID deaths a month. From August 21 to September 20, there was a large increase mirroring the spike in cases, with Athens unfortunately losing 16 people that month to COVID-19.

We can’t attribute all of the 13 excess deaths during that month to UGA’s reopening alone, but UGA does bear some responsibility in my view.

Our local government, on the other hand, acted much more responsibly during this pandemic. They were quick to issue a shelter-in-place ordinance and a mask mandate. They also attempted to keep the economy, particularly the bars, closed for as long as they could. When this was no longer possible, they cut back “last call” to 11:30pm in a final attempt to limit the number of people infected.

These were difficult decisions. Our local economy has suffered under the restrictions, but if it saved lives, I feel it was worth it. It’s truly unfortunate that Congress has been so slow to act to pass another relief bill which could help ease the suffering.

The local government has made a number of attempts to help struggling families and businesses weather this difficult time. For example, they allowed “parklets” outside to give restaurants a safe place to operate and on special occasions even allowed bars to serve alcohol outside. They have also provided direct relief to businesses and the public through business grants, by making Athens Transit fare-free and by giving $639,000 to three non-profits which provide direct assistance to families in need, among other relief efforts.

This has been the toughest year in recent memory for many people, but there were positive things that happened in 2020. Let’s remind ourselves of these good things now, focusing on local government and politics with a bit of state politics thrown in:

The Confederate monument on Broad Street came down this year after the George Floyd protests gave Mayor Girtz the political space to do what he had been wanting to do anyway. While mostly a symbolic victory, it deserves to be mentioned on this list.

More tangible are the police reform efforts underway on multiple fronts — first, Mokah Jasmine Johnson has been leading a task force to develop recommendations for the civilian oversight of police. Second, Commissioner Melissa Link included $350,000 in this year’s budget for a “Public Safety and Community Building Task Force.” Members of this second group will take a comprehensive look at law enforcement in Athens and could potentially recommend reductions in police funding, as requested by protesters earlier this year.

National EMS currently handles the dispatching of its own ambulances in Athens, but this is about to change. Earlier this year, the commission voted to consolidate all 911 services within ACCPD’s 911 center, including ambulance dispatching.

This was the recommendation of the police department and was done to improve efficiency and reduce response times. As a side effect, since all calls will be routed through a public institution, ambulance response time data will be available to the public in Athens for the first time, as surprising as that is.

The consolidation process will likely take a few years, due to equipment that needs to be purchased and new 911 dispatchers that need to be hired and trained in Emergency Medical Dispatching protocols. Once the process is complete, it will allow 911 dispatching in Athens to “become more efficient, transparent [and] accountable” and “most importantly, lives will be saved,” according to public safety advocate Sam Rafal.

The commission passed fare-free nights and weekends on Athens Transit earlier this year, but once the bus started to receive federal relief dollars, it went fare-free for all riders and might stay that way. The CARES Act, also known as the coronavirus stimulus bill, provided Athens Transit with $9 million in 2020, enough to pay for its entire budget.

Unfortunately, ridership dropped greatly during the pandemic — numbers are down 60% compared to last year. A silver lining might be that with ridership this low, it no longer makes economic sense to charge a fare, if it ever did in Athens. The costs associated with collecting fares, such as fare-box purchase and maintenance, are larger than you might think, and with so few riders we might as well let everyone on who wants to ride, rather than refuse a passenger and let the bus continue on its lonely way, empty or close to it.

Once COVID is tamed, we might even see a spike in ridership if the bus stays fare-free as well, as usually happens when bus services stop charging.

The west end of downtown, including Hot Corner, the 40 Watt and Cine, was finally protected against out-of-scale development this year with a new historic district.

Before the vote, many speakers lined up to give the commission a piece of their mind, both for and against. It was contentious among commissioners as well and would not have passed without some political maneuvering.

Supporters of the new district, including Commissioner Melissa Link who spearheaded the process from the beginning, delayed the vote until Jesse Houle was sworn in as the new commissioner for district 6. Houle then cast the deciding vote in favor of the new historic district.

In 2018, Athens voted for a new, more progressive mayor and commission, transforming the legislative branch of our local government. This year, Athens’ voters made headway on the executive and judicial branches with victories for both John Q Williams, who ran for Sheriff, and Deborah Gonzalez, who ran for District Attorney.

Williams narrowly defeated long-time incumbent Sheriff Ira Edwards in the Democratic primary, despite being outspent 3-1. Williams promises to bring a new era of transparency, accountability and reform to the Sheriff’s Office while pushing forward on criminal justice reform. He refuses to illegally cooperate with Immigration and Customs Enforcement (ICE) as did his predecessor and did not accept money from bail bondsmen or the private prison industry during his campaign.

As did Williams, Deborah Gonzalez ran on a platform of justice, transparency and change; she promises to end cash bail, reduce prosecutorial overcharging and refuses to prosecute low-level cannabis offenses. She also defeated more conservative opponents who had long records of working within the current system. She even defeated the Governor in court when he tried to cancel her election to prevent her from winning.

Georgia had been predicted to become a swing state in the 2020s for years, but now we finally have proof: BIDEN WON GEORGIA.

Regardless of what happens in the Senate runoffs on January 5, Georgia will be considered a swing state going forward and we might even see it turn solidly blue in our lifetimes. This is thanks to the hard work of Black organizers like Stacey Abrams and others in Fair Fight, the New Georgia Project and Athens’ own Economic Justice Coalition.

If you value APN’s coverage of local news and politics, why not become a member? You’ll get a vote on upcoming videos and on APN advertising and political policies. You can also give a one-time contribution over PayPal. 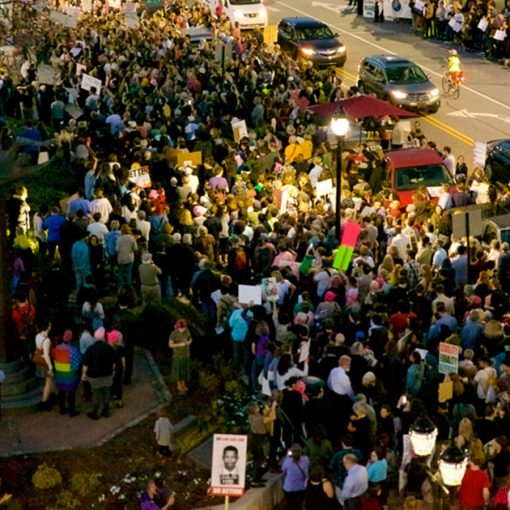