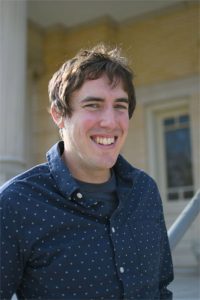 Houle currently serves on the Boards of Advantage Behavioral Health Systems and the Industrial Development Authority. Previously, Houle worked as the Operations Manager of Nuçi’s Space, a non-profit focusing on suicide prevention and support for local musicians, and as the Outreach Coordinator of the progressive advocacy group Athens for Everyone.

Houle has completed the necessary classes to become a certified county commissioner. They also attended but did not graduate from Worcester State University.

Primary Ballots: Houle almost always takes Democratic primary ballots, but not exclusively.
They are a member of the Athens-Clarke County Democratic Committee.

Fighting Homelessness — Houle was the primary author of the ACC Commission’s “Resolution to Address Homelessness with Immediacy and Strategic Planning.” This resolution resulted in the creation of the First Step homeless encampment and also a deeper partnership between the Athens Homeless Coalition and the ACC Commission, which Houle mediated. Another consequence of Houle’s efforts was the approval a strategic plan to address homelessness.

Transforming Athens — During their 2020 campaign, Houle had an in-depth platform detailing their plans to move Athens leftward, including living wages for all workers, racial justice, a Green New Deal in Athens, affordable housing, participatory budgeting and more.

Significant progress has been made on many of these issues during their first term. For example, the ACC Government raised their wage floor to $15 an hour in 2021 and then to $15.60 in 2022 as a direct result of advocacy by Houle and others. Houle was also effective in pushing the Classic Center to raise their wage floor to $15.85, although it remains to be seen if they will live up to this commitment.

Pedestrian Safety — Houle is a proponent of improving pedestrian safety throughout Athens but especially in District 6. Houle helped their constituents write two TSPLOST 2023 projects to improve pedestrian safety in historically under-served areas, including the Stonehenge and Westchester neighborhoods. These projects were funded in the final TSPLOST list, in no small part due to Houle’s advocacy. Houle also successfully pushed for Athens renters to get the same respect as homeowners in the county’s formal process for requesting traffic calming for their neighborhoods.

Prison Abolition — Houle wore a shirt saying “Abolish prison” when they were sworn in on November 17, 2020. They have publicly supported Commissioners Mariah Parker and Tim Denson’s plan to reinvest 50% of ACCPD funding into the community over a period of 10 years.