Hundreds of Black Lives Matter protesters and pro-police counter-protesters gathered outside city hall on Tuesday to comment on a controversial proposal to “reimagine public safety” and divert money away from the Athens-Clarke County Police Department.

Commissioner Mariah Parker and Tim Denson developed the proposal, which they refer to as the “50/10 Plan.” That’s because it seeks a 50 percent reduction in the size of ACCPD over a period of 10 years. More than 100 Athens residents spoke about the plan in an avalanche of civic engagement that skewed strongly in favor of Parker and Denson’s proposal (APN counted 87 speakers in favor compared to 31 against).

During the public comment period which lasted more than four hours, some Athens residents explained that they don’t feel comfortable calling armed police for help in a tense situation. Others expressed distrust of the police stemming from national events, the recent use of tear gas and rubber bullets against protesters and the six officer-involved shootings last year in Athens which led to five deaths.

Social workers and UGA social work students were among those lining up to comment. They described how the proposal would help them in their jobs providing services and support to Athens’ poor and vulnerable.

“Commissioner Parker’s 50/10 Plan is not just important, it is imperative to the health and safety of our residents,” said Victoria Slaboda, a court-appointed special advocate who works with DFACs in Athens. 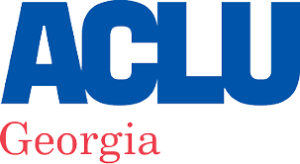 The Georgia ACLU has also publicly supported this plan. In a recent statement, they commended the 50/10 Plan as “the best and most serious effort at tackling this problem currently on the table anywhere in our state.”

Defund the police? Some aren’t so sure

Members of the Athens GOP came out to oppose the 50/10 plan and support ACCPD, saying the department doesn’t have the issues seen in other police agencies across the country.

“We do not have systemic racism here,” Mary Padgett, a resident of the Moss Side subdivision, said.

Others cited the need for armed police officers to deal with crime and urged increasing funding to the police instead.

Those who spoke in opposition included black and brown community members who feared a rise in violent crime were the plan to go into effect. “Police brutality is wrong, but defunding the police is also not the solution,” Nitasha Jeffries said.

Jonathan Miranda, a black Athenian, described a harrowing ordeal he faced after being shot by a gunman when he was 18 years old. According to Miranda, the ambulance took twenty minutes to arrive although the police were on scene in half that time. “The police are not our enemies,” Miranda said.

Due to the ongoing threat of COVID-19, only a handful of speakers were allowed inside the commission chamber at once, meaning there was ample time for the two groups to interact outside city hall.

Black Lives Matter protesters arrived early for a teach-in and demonstration to “End Slavery In Athens,” referring to the use of unpaid inmate labor by the ACC government. They took up position on the steps of city hall holding signs and chanting as members of the Athens GOP began to arrive and gathered below.

Tensions ran high with shouting back and forth, but both groups generally remained peaceful. One confrontation did occur when a black activist was nearly pulled down the steps by an older white man, but fortunately no one was hurt.

This was the final “taxpayer bill of rights” hearing on the ACC fiscal year 2021 budget, which is scheduled for a vote on June 25. 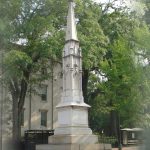 As if this wasn’t enough excitement for one day, this meeting also contained an agenda item which will move the Confederate monument. That is, if the plan isn’t stpped by the Sons of Confederate Veterans, who have filed a lawsuit.